skip to main | skip to sidebar

Pair of Lincoln and Wellington on horseback

I was absolutely thrilled to hear from Louise Stevenson with the answer to my problem, about why Abraham Lincoln was paired by the mid Victorian potters with the Duke of Wellington.

Louise is an expert on the world of Uncle Tom and spoke to the Staffordshire Figure Association several years ago on the subject of Harriet Beecher Stowe and Uncle Tom; it was fascinating stuff.

The Illustrated London News was an important source for the potters and many, many moulds were based on the newspaper prints. For years we wondered why Garibaldi was paired with William Shakespeare as they lived centuries apart but it seems that Garibaldi visited England just about the time of Shakespeare's 300th birthday, and surely in some issue of the News in 1864 the two pictures were juxtaposed. (See Stephen Smith's Sunderland site for more on this: http://www.matesoundthepump.com/ )

So, back to Lincoln and Wellington. The assassination of President Lincoln was much in the worldwide news in 1865, which happened to be the 50th anniversary of the Battle of Waterloo (1815), easily explaining why these famous men were paired up by the potters.
What it doesn't explain, why on horseback?
Posted by Elinor Penna at 12:48 PM 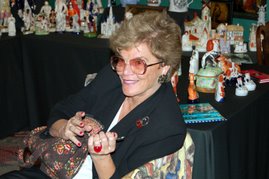